If you were at the worship service on April 24 or watched it online, you heard Pastor Jane’s excellent Tree Sabbath message about the significance of trees in scripture and the references to “trees of life” in both Genesis and Revelations.  Saint Paul UMC and 27 other Lincoln churches are each engaging in special activities to honor this year’s 150th anniversary of Arbor Day.  As announced in the worship service on the 24th, the project our church has launched is called “God’s Tree-mendous Creation” and its purpose is to plant as many trees as we can during 2022.  Planting trees is one of the ways to combat climate change as trees absorb carbon dioxide and release oxygen. We as Christians need to recognize the inequitable impact of climate change.  A hotter climate is a threat to food supplies and health and when facing food and health challenges, persons with fewer resources fare much worse.  Mitigating for climate change is indeed an issue of justice.

To be part of this important project, please complete one of the special donation sheets that will be at the back of the sanctuary through the spring and summer and choose how you wish to participate. You can contribute toward the purchase of one or more trees.  $200 will buy one good size tree and will also provide for professional planting of that tree.  Or you can make your contribution go further by agreeing to do the planting of one or more trees yourself.  Either way, you can make your monetary donation by check indicating it is for the tree project or by clicking here.  Also, you could adopt a tree that has been planted because of this project.  Adopting a tree means taking care of it, including watering until it can fend for itself.  Finally, you can volunteer to assist in the siting of trees in those less advantaged areas of our city where additional trees my be the most needed.  If interested in doing that contact a member of the Climate Justice team.

For 2022 Lent, the Climate Justice Team prepared and made available a Carbon Reduction Action Calendar that had daily suggestions for how we can educate ourselves on the climate change crisis and reduce our carbon footprints.  We hope you took the opportunity to review that calendar each day and to pursue at least some of the suggestions found there.  Even though 2022 Lent is now over, we have decided to leave the calendar on the website at least though May.  The suggestions remain valid on any day, not just those during Lent.  Please take advantage of them at any time and, if you like, print a copy for future reference. 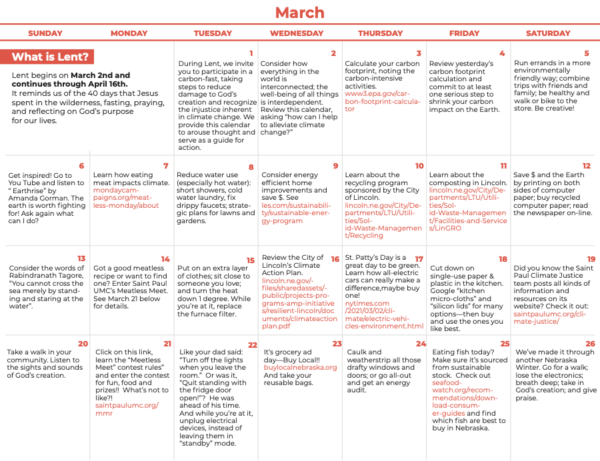 Climate Change in the 2022 Nebraska Legislature

The 2022 session of the Nebraska Legislature was completed on April 20.  Most of the legislation relating to climate change that was previously identified here failed to pass, but two bills, one of which was listed here, LB925, did pass and was signed by the governor.  One other bill, LB1014, became of interest late in the session.  LB925 and the relevant portion of LB1014 are summarized below:

LB925: Healthy Soils Bill—This bill adopted the “Resilient Soils and Water Quality Act.”  That act recognizes that over time, Nebraska’s agricultural soils have been degraded and that some groundwater supplies have become contaminated with nitrates.  In short, the act provides for a grassroots approach to convince farmers that it is in their interests to use best practices to improve the health of their soils.  While the words “climate change” are not found in the act it is well documented that farming practices that improve soil quality also result in greater sequestration of carbon.  The Department of Natural Resources will serve in an administrative role and will hire a “facilitator” to lead the effort including the organization of a “producer learning community.”  The Department will also need to submit annual reports by December 31 of each year of the project.  The act indicates that the intent of the legislature is to appropriate $250,000 for each project year through FY2026-2027.

LB1014: Appropriation for Update of Climate Change Report—LB 1014 is an act that appropriates funds for several state purposes.  Section 40 of that act appropriates $150,000 of federal funds to the University of Nebraska to update the Assessing Climate Change report that was released by the University in 2014.  Instead of authorizing the University to do the update itself, the bill requires it to “contract with a third-party, science-based organization to develop an independent report that identifies and recommends specific prescriptive measures to be taken by the State of Nebraska relating to the updated Assessing Climate Change report. Such prescriptive measures shall include (1) a conservation and management plan under section 320 of the federal Clean Water Act and (2) plans for green infrastructure investments and projects to improve resilience to climate change.”  The updated report is to be completed by 12-1-2024.

7. For information on the sources and proportions of greenhouses gases in our atmosphere, take a look at: https://www.epa.gov/ghemissions/overview-greenhouse-gases.

8. To calculate your own carbon footprint and see which of your activities are causing the most emissions, do the fun activity found at: https://www3.epa.gov/carbon-footprint-calculator.

9. To learn about emissions globally, by type of gas being emitted, by economic sector and by country, see: https://www.epa.gov/ghgemissions/global-greenhouse-gas-emissions-data.

10. Arguments are still being made about whether electric vehicles result in fewer greenhouse gas emissions when their manufacture and disposal are also considered.  For an excellent article about how much lower emissions are with an EV, read: https://arstechnica.com/cars/2021/07/electric-cars-have-much-lower-life-cycle-emissions-new-study-confirms/

12. An article about divestment in fossil fuels in the New Yorker magazine can be found at: https://www.newyorker.com/news/daily-comment/the-powerful-new-financial-argument-for-fossil-fuel-divestment.

13. Composting of food waste and other organic materials is another way of reducing greenhouse gas emissions.  The City of Lincoln’s website has several items of interest about composting including how to do it ourselves and what is available commercially in that regard.  It can be easily accessed by going to: https://www.lincoln.ne.gov/home and by searching for “compost.”  The UNL Extension Service also has made a lot of helpful information about composting available at: https://extension.unl.edu and by searching for “compost” there as well.

What mission and ministry is your church engaged in that would fit in the category of justice?
What transformations have individuals, your church, and/or community experienced through missions and ministries of mercy or justice?

We have gained new members through our efforts at justice as people have seen our witness with PRIDE festival and our rainbow banners outside the church.  Each have told stories of their previous exile from churches due to homophobic or shame-based theology.  They have found new life and new connection to God through the welcoming of Saint Paul UMC.

Our strategic planning team has identified three areas for our focus:  racial justice, ecological justice, and health care.  Each of these areas will be resourced and ministry teams will be formed to engage the congregation in love, education and action. We will schedule our efforts strategically by launching one at a time and building support before adding the next.